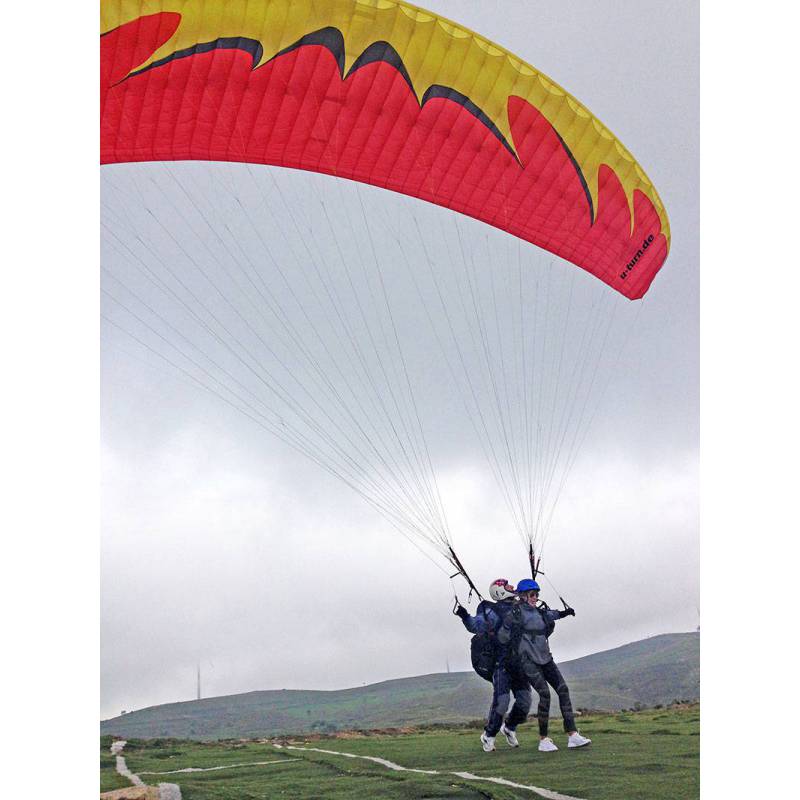 Tandem little used, in perfect condition. It's the one shown in the first photo (yellow and red)

High performance with maximum passive security in a tandem has, until now, been an unsolvable conflict. Now is the start of a new age: The U2, the new Tandem glider from U-Turn GmbH, has agile flying characteristics as well as a very high degree of security thanks to the revolutionary AFS-System (Automatic Flight Stabilization).

AFS technology, invented by U-Turn chief designer Ernst Strobl, represents a basic change in glider construction. Until now all measures to improve security resulted in a loss of performance, and vice versa. With AFS technology the issue of design compromises is no-more.

The brilliant, basic principle of AFS is based on pre-tensioning of the under surface at the trailing edge. A special sewing method at the brake attachment points provides the desired effect. In calm air there is enough pressure inside the cells to neutralise the pre-tensioning at the brake attachment points, i.e. the pressure inside the wing is stronger than the pre-tensioning and the trailing edge of the glider stays aerodynamically perfect just like a conventional glider.

When entering turbulent air with an AFS equipped glider, the system adjusts immediately; even the slightest drop of internal pressure allows the system to react and the pre-tensioning at the trailing edge effectively ?pulls on? the brakes. A canopy featuring the AFS-system reacts without any steering or braking action from the pilot.  This is exactly what the safety experts of the DHV recommend: The wing itself flies actively and therefore more safely. Of course the U2 uses the advantages of the dynamic cell-width reduction and the geometric setting of the profiles as well.

Thanks to the increase of security provided by the AFS system, Ernst Strobl was able to choose a profile with a more ambitious aspect ratio and shape. Andi Siebenhofer proved the concepts behind this system by making his record breaking flight across the Mediterranean from Greece to Egypt by paramotor on an AFS equipped U2. Andi?s paramotor equipment setup allowed not only a top speed of 62km/h, but also the durability and extraordinary stability to cope with a hail storm!

Besides high performance and integrated automatic security the U2 offers everything you can expect as a professional or hobby pilot including a descent rate down to 1.1 m/sec; thus far unknown agility for a tandem glider; the landing behaviour of a solo glider. Unlike most other tandem gliders, the U2 offers a trimming riser which is approved by the DHV. Utilising the trimmers the glider can be adjusted perfectly to the prevailing wind and above all, the speed can be changed by up to 7 km/h. Accordingly a slow set-up of the trimmers allow an extreme slow lift-off speed making it possible to have a take off with old or disabled people. Launching the U2 is very easy, because the wing neither sticks nor surges forward.

To be able to concentrate fully on the passenger whilst flying the U2 has two other features built in to the risers to make the pilot?s job easier: B-stall-assistance; and a separate A-riser for ?Big-Ears?. ?Big-Ears? increases both the angle of attack and the surface load leading to a very stable flight attitude whilst the glider remains fully controllable. Whilst flying with ?Big-Ears? the descent rate varies between 3 to 5 meters per second depending on the number of cells folded in. The ?Big-Ears? A-riser feature has been borrowed from the U-Turn beginner?s glider, the BODYGUARD, where this feature serves as a security device to help inexperienced pilots to distinguish outer A-lines from the inners. Of course this kind of mistake doesn?t happen to experienced tandem pilots but Ernst Strobl nevertheless decided to add this feature to the U2, ?Because it improves the ease of use allowing the pilot to put his attention to other things.?

The B-stall-assistance acts in a similar way. B-Stall is initiated by pulling the b-strap, this causes the current to break away from the top surface of the aerofoil and the canopy folds in the direction of the aerofoil effectively becoming a parachute. The glider then starts sinking at a rate of about 5 to 8 meters per second without moving forward. If the C-risers were pulled accidentally to initiate the B-line stall the whole flight attitude becomes instable, the glider tilts back and gathers backward speed shortly followed by heavy swinging. This is impossible with the distinctive B-stall-assistance feature. With a conventional glider a very strong effort is needed to pull the first 5 to 10 centimetres sometimes this effort is so great that it proves impossible for some pilots. By using a pulley system the beginning of the B-Stall on the U2 does not need much effort and can be done sensitively.

A special feature of the U2 is the ingenious line schema. The load bearing requirements of every riser was calculated specially by Ernst Strobl leading to the reduction at certain points of the diameter of the lines. This in turn realised an added potential in handling and performance, which is often underestimated. Effectively the line diameters vary according to the requirements of the different parts of the wing. According to Ernst Strobl: ?In the U2, we use high-tech fibers which can hold up to 400 Kilo on each line.?